'Northern Passages' at the Russian State Museum of the Arctic and Antarctic in St. Petersburg. Artifacts included in the exhibition are from the Museum's archive of objects from the Fiala/Ziegler expedition to the North Pole 1903-1905. This was the first time the objects have been on public display. 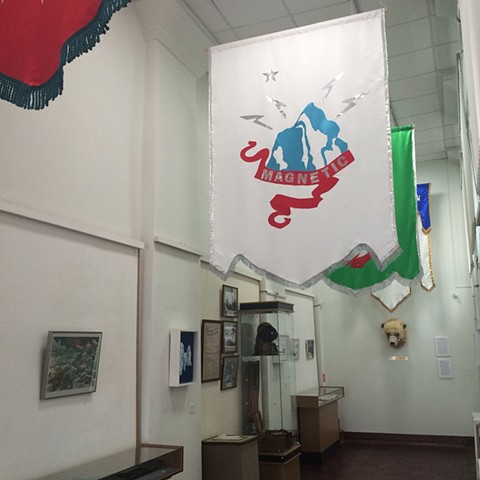 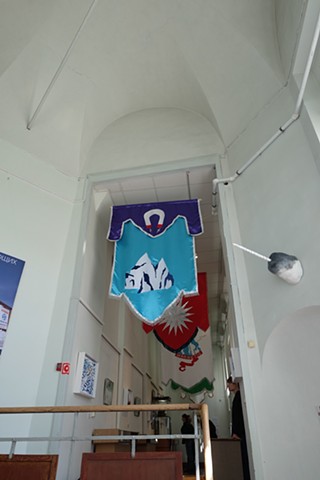 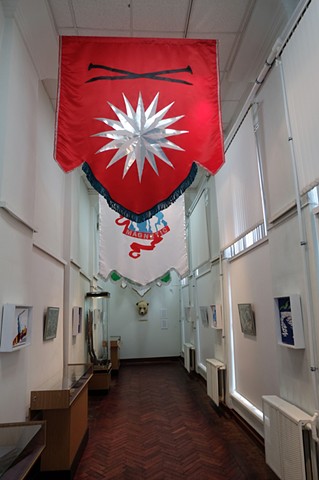 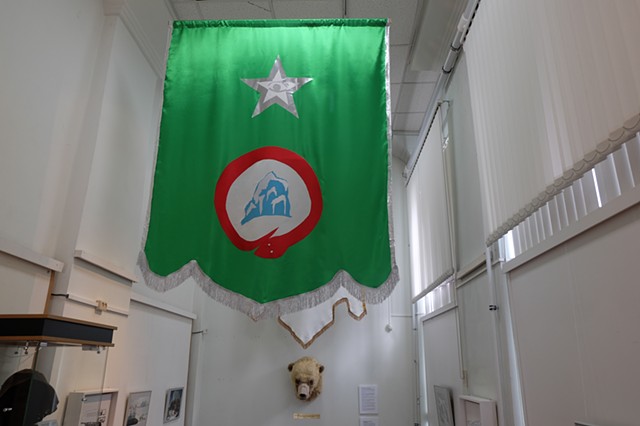 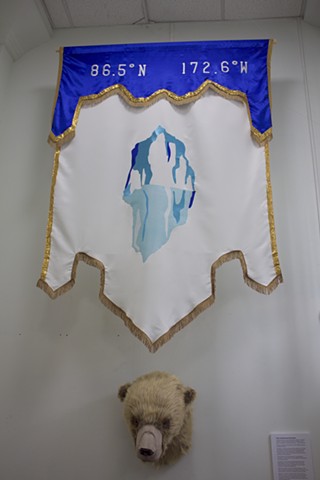 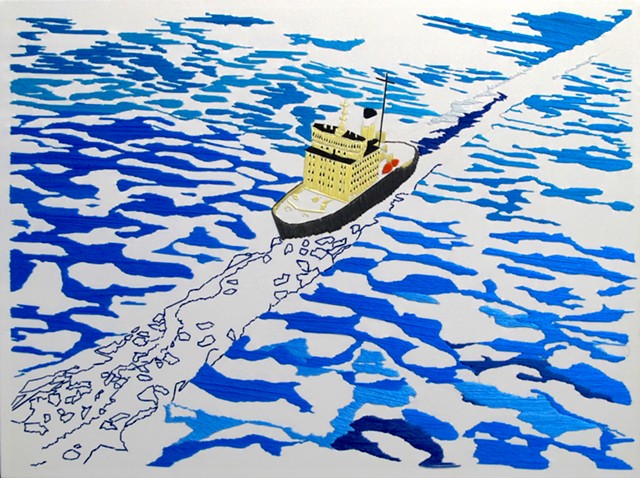 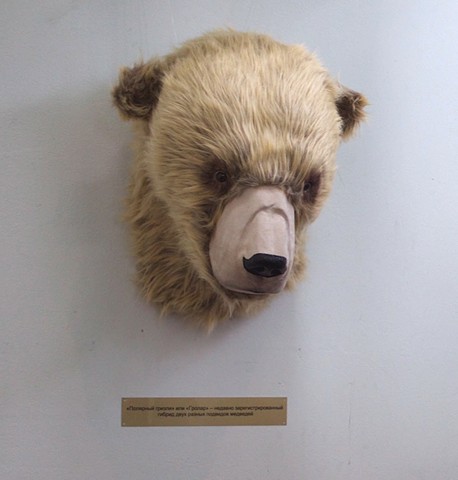 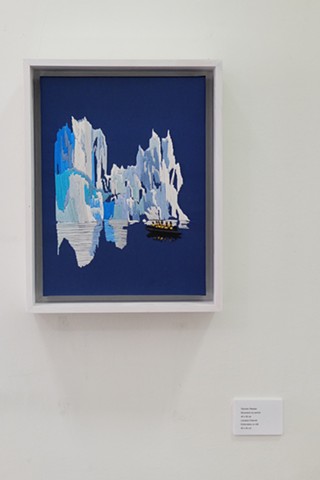 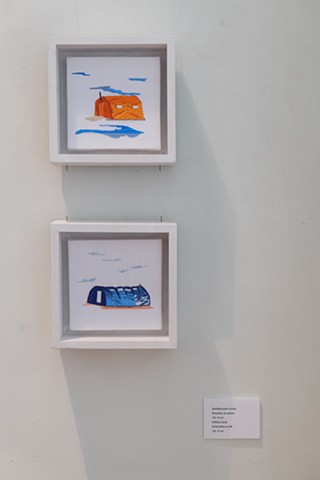 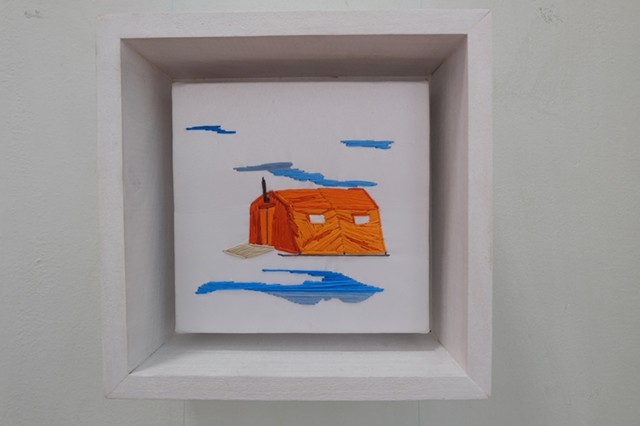 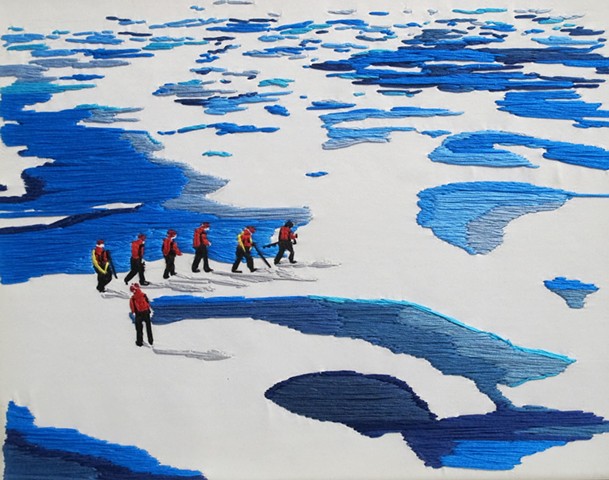 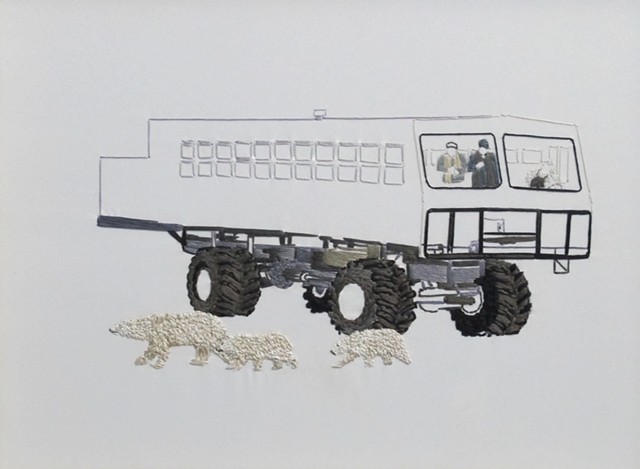 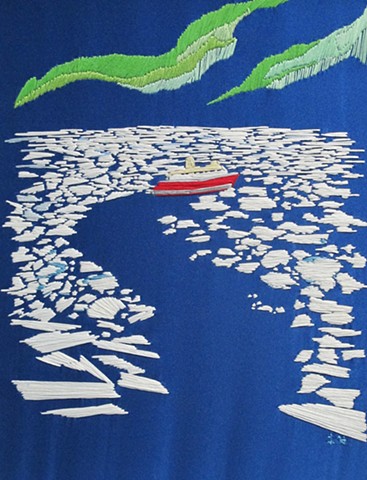 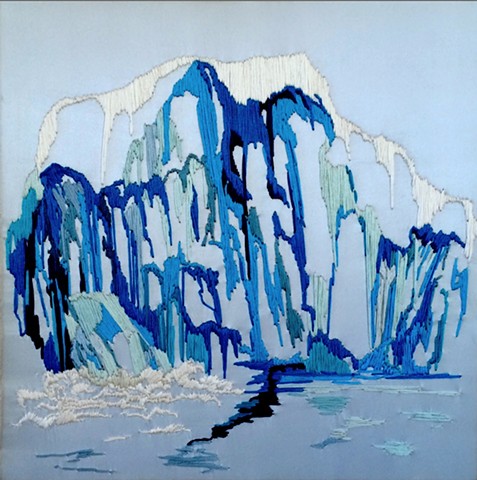 Calving Into the Sea
Embroidery on Silk
14x14 inches 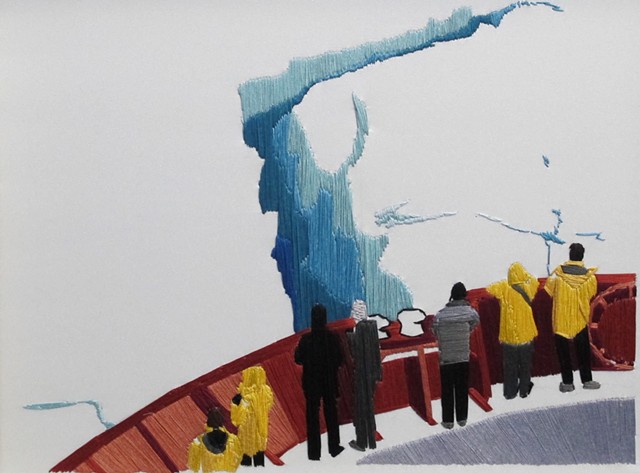 Breaking Through the Ice
Embroidery on silk 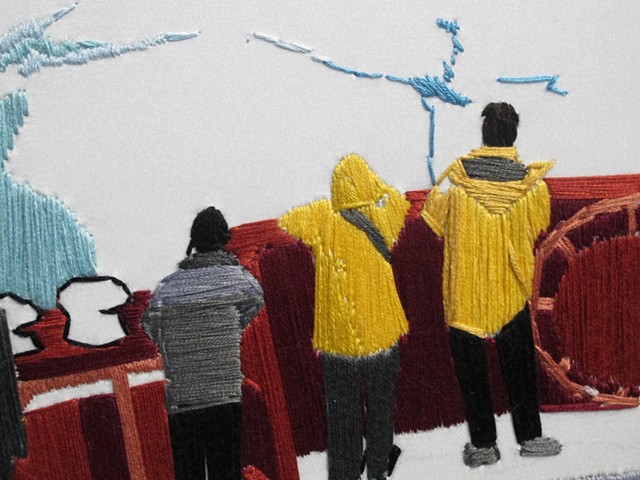 Breaking Through the Ice
Embroidery on Silk 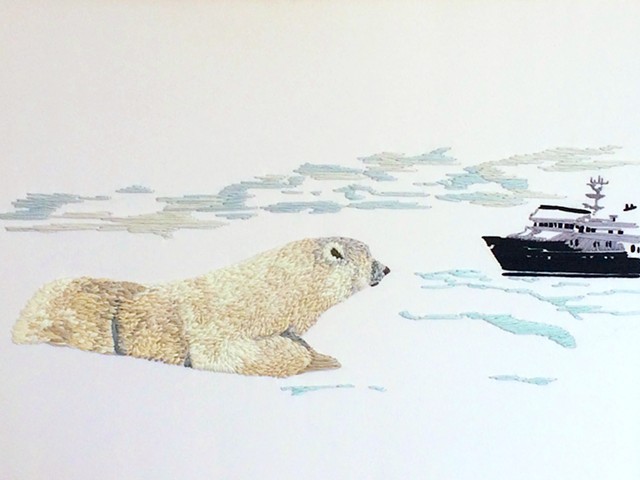 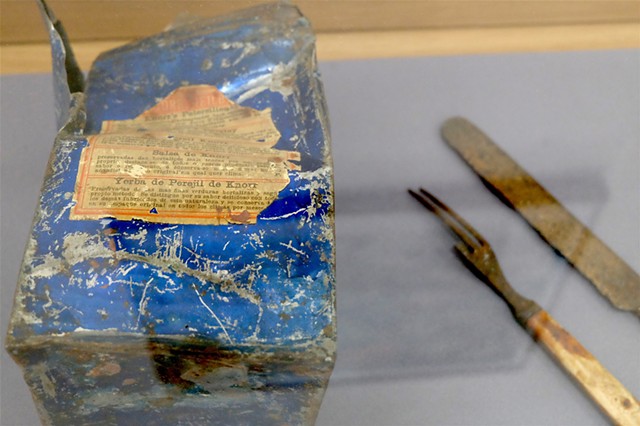 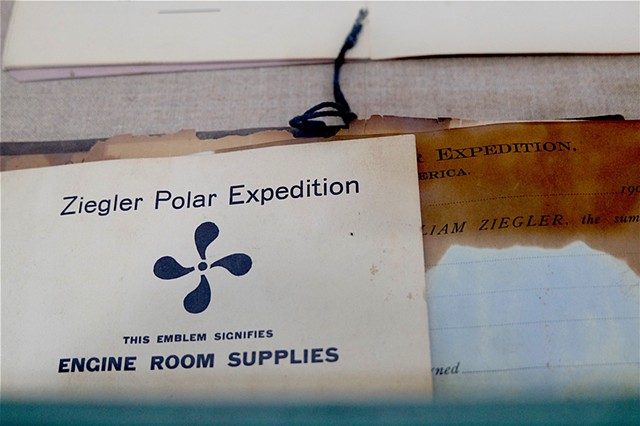 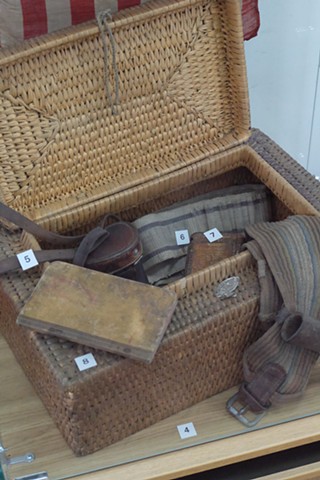 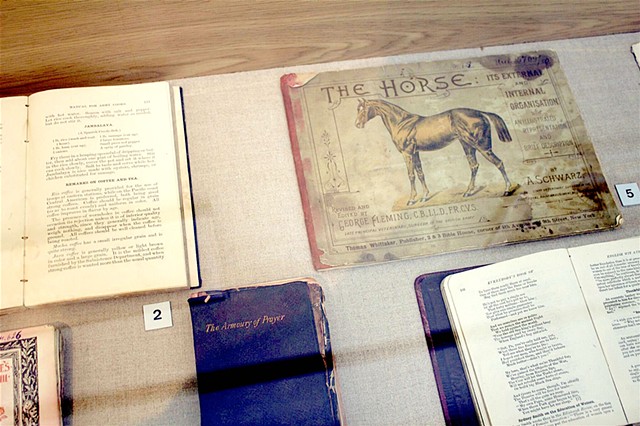 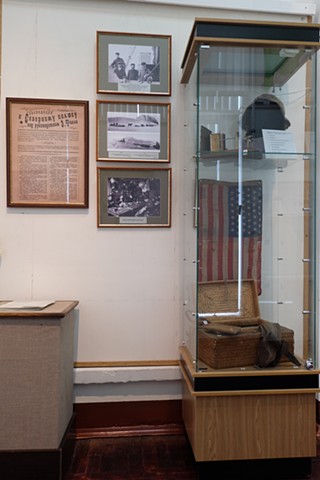 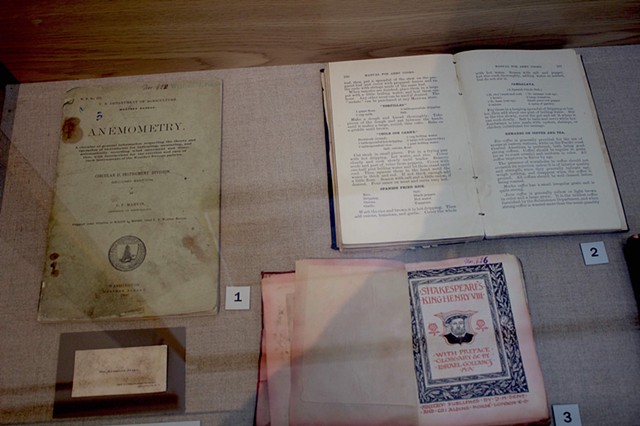 Curator Arseny Zhilyaev For more than 10 years I have been working with museums outside the fine art realm. My interest in these collaborations came from research from my own art practice. Russia is a country where it is not very easy, especially in smaller cities, to find good contemporary art. Non-art museums do create installations that can be compared to the best examples of experimental creativity. But of course, there are some challenges. To let a contemporary artist into the museum, especially if it is an American, means taking a big risk in current political circumstances. Even in my case, as a Russian citizen, working with non-art museums is extremely complicated in today’s political climate. Even more surprising the project ‘Northern Passages’ managed to travel to several museums in Russia. The employees of these museums showed courage and were willing to work together with us. Without them, nothing would have happened.

It all started with the Russian State Museum of the Arctic and Antarctic in St. Petersburg. I had spent about a year in this wonderful city. A good portion of this time was spent in local museums, and there are a lot in St. Petersburg. The Arctic and Antarctic Museum made a strong impression on me, the architecture itself, the history of the museum’s struggle for life against the Russian Orthodox Church (unfortunately, the church in Russia often takes buildings from museums and land from parks, which in turn are often located in former monasteries, but it is a strange tendency for the 21st century), an amazing collection and, of course, the people. After my first visit to the institution, I immediately had the idea to curate an exhibition of Lauren Hartman’s work here. But to be honest, I almost did not believe it was possible. But what a surprise it was when the museum’s directors and museum workers, (often former polar explorers themselves) supported the idea and, supported the project fully, and were involved in every aspect of the exhibition. For me, the history of the project Northern Passages itself is somewhat similar to an expedition to the Arctic Circle. It was initially fraught with a lot of challenges, but thanks to the courage and human mutual assistance, everything went well. I am very happy that I was involved in this project.

Mythology The banners represent the cross-cultural mythology of the Magnetic north. Myths from around the world speak of a Magnetic mountain, the center of the Universe. For the Buryats of Siberia it is Mount Sumur which has the North Star fastened to its axis. Buddhist and Hindu cosmology discuss Mt Meru or Sumaru as a Mountain with magnetic properties located in the center of the physical, metaphysic, and spiritual realm. It is the central magnetic point of the Universe. In European folklore, the Magnetic mountain reappears in texts and traditions of many ages. In the mid 16th century the German-Netherlandish cartographer, Gerard Mercator, described the North Pole as a large black magnetic rock at the center of the Earth surrounded by a whirlpool. Dogon from West Africa and Norse mythologies depict the Northern most point as a mountain surrounded by a long serpent. The lost book Inventio Fortunata, written in 14th century, England, describes the North Pole as a Magnetic island surrounded by a large whirlpool. In both European and Arabian folklore the magnetic force of the mountain was so strong it could pull nails from ships!

Pizzly Bear (2017), Mixed Media The Pizzly Bear or “Grolar” is a recently documented hybrid of two distinct bear subspecies; the Grizzly Bear or the proper “North American Brown Bear” (Ursus Arctos) which roams the North American continent and the Polar “White” Bear (Ursus Maritimus) which roams the shifting line between ice and land. As the Arctic warms and sea ice melts, Polar Bears are forced to spend more time hunting on land, pushing further into the Grizzly’s domain. For the Grizzly bear, warming climate and the melting of permafrost allows the Grizzly to reach more abundant, thawing soil. As both the Polar Bear and the Grizzly are genetically quite similar, there is strong mutual attraction. Their mating seasons overlap and they produce fertile offspring, improving their survival rate. In 2006 DNA from a bear shot in the Canadian Arctic was confirmed as a hybrid of the two species. This was the first confirmed record of the Pizzly.